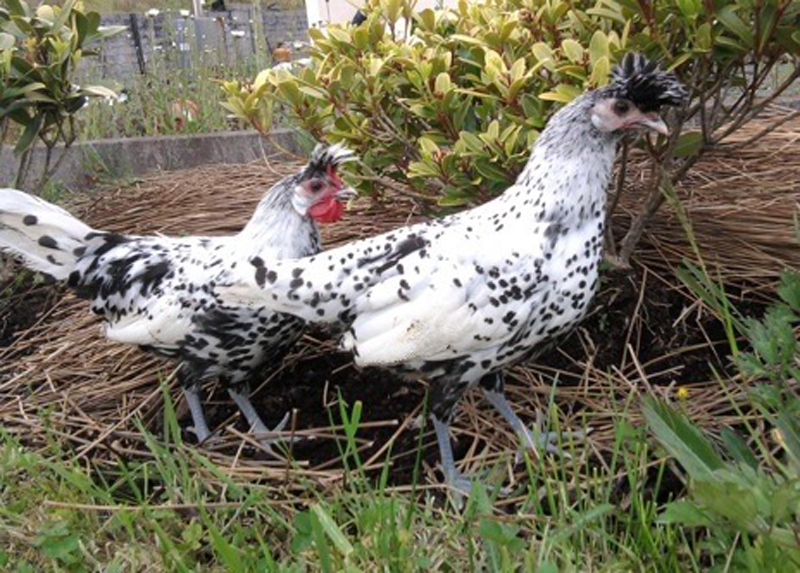 Time flies, birds fly, I fly… Everything is happening simultaneously and there are so many funny little things I would like to share with my friends and family thousands of miles away that the best idea seemed to start blogging.

This is my first blog evoked by a long dream come true – I eventually have a pair of 15-week-old chickens Tip & Täp. They are pure bred Silver Spangled Appenzeller Spitzhauben chickens. This is a very old breed from the Swiss Alps dating back to the 15th century bred mainly for isolated monasteries in mountainous environment. They are excellent in foraging along rocky slopes, independent, intelligent and can survive harsh weather conditions as they have no large combs or wattles to freeze. Besides looking absolutely gorgeous they are also fairly good layers of medium-size white eggs and are tasty table birds.

As this breed is often described to be “flighty” and nervous I decided to start bonding with them right away. Until the arrival of their walk-in chicken coop they stayed out in a small run and by the night I took them inside the house where they had a really large box for spending the night. At first there was no need to cover the box as they did not express any wish to get out but then, evidently after getting used to the surroundings, there came an evening when they decided to start exploring the house. Although looking gorgeous I kind of objected to their intent, but instead of chasing them around the house, I put a narrow board across their box and some food into the box while they were observing my every move. Then I just stepped aside and let their curiosity do the job. Slowly and with dignity they started to move towards the box, then looked at the roost and flew to it, from the roost there was an inviting view of all goodies in the box and down into the box to indulge themselves they jumped. All parties were satisfied with the result.

From then on their box was covered with a net. We worked out excellent solution, they were nicely under the net until they felt it was time to go to sleep, then the rooster just flew once against the net to inform of their wish, I then removed the net and put the roost in place which they occupied immediately. Of course I had to sit in the hall for a while until they were indeed asleep because they had a ritual which was performed every evening. First they had to find the best place on the roost and exchange places several times, then they chanced the situation and at least four times attempted to go upstairs – evidently the wooden staircase leading to the first floor seemed to be a much more luxurious roost than their current simple board. All I had to do to change their mind was to apply strict tone of voice and they turned back to the roost. I simply love their intelligence! One evening just before sunset rooster discovered his shadow on the wall, he moved and the shadow moved, it took him awhile to get convinced that his own shadow is not a threat to them.

Another test on their intelligence took place on a hot sunny day spiced with rainy spells every now and then. Tip & Täp were out in their run when it started to rain and I was under a large umbrella nicely dry. The large umbrella could easily accommodate them as well. So, into their run I went and crouched down holding the umbrella over the three of us. It was their first rain outside and they carefully observed small rivers of water flowing along the umbrella and then falling down. During the second rainy spell I hurried into the run too hastily which frightened them a bit and they moved away. Crouching I slowly moved towards them until we were all covered. Again they observed the falling raindrops. The third rainy spell was a serious one, water was pouring down. I just crouched with the umbrella in the middle of the run and did not attempt to follow them. At first they proudly went away, tried running in zig-zag pattern to get away from the rain but it did not help, wet they got no matter how fast they moved. It was quite funny actually, although lasted only for a few seconds, they both swallowed their pride and with one quick leap flew right next to me to be nicely dry and comfy under the umbrella, to observe small waterfalls running down the umbrella and to listen to the rain drumming against the umbrella, look up to me while being at ease and relaxed. It is simply amazing how fast they learn.

They had been quiet all the time and I was happy, co-existance in full mutual understanding but then came the morning when the rooster discovered that he can crow, he made this discovery four o’clock in the morning and he crowed with delight some 20 times in row! Well, I was delighted to hear one of them make a sound eventually but it was definitely time for them to get their own place. My neighbour Joe kindly came to rescue and he built a mobile run for Tip & Täp with one end having a cover over the roost for the night and providing shade during hot days. They were quite happy with the new run, I was quite happy as would not be woken at 4 a.m. on daily basis.

During the whole first day in the new run they had been exploring it, so I thought that they are ok for the first night outside. Before it was getting too dark I went to check on them and to my surprise found both outside the run. Being good foragers they had just removed enough of long moss and earth to get out. But the poor things were terrified, running back and forth in panic looking for a safe place to roost for the night. When they noticed me both came running as fast as they could towards me. I bent down and the hen without stopping just jumped and landed on top of my head, the rooster followed and settled on my left shoulder!!!

Well, I don’t mind them being flighty! It was incredible feeling, they expressed trust and did not mind being handled. Couldn’t help smiling as I must have looked like a pirate only instead of a parrot there were two chickens. So, I took them to their familiar box inside the house because if they could get out, pine martins or other predators could get in. Next morning the mobile run was relocated to a firm ground with nice grass for them to nip at and no more surprise escapes since.

After that evening I definitely wanted more of them, alas they are not a common breed in Ireland. It took a long and most beautiful journey through breathtaking landscape up to Ballyshannon in County Donegal to get three more 12-week-old Appenzeller Spitzhaubens from a nice young man Chris who has lot of experience in raising various chicken breeds and he also gave some valuable advice. Chris had other pure bred chickens and I had to resist a sudden urge to take seriously lovely Buff Orpingtons as well.

The trio of my new flock is talkative, their speech is quite rich in various sounds, they express themselves discreetly in quiet tones but being young they mostly chirp. They are going through the bonding process in the old box of Tip & Täp. In the first evening I took the smallest one into my lap, she was evidently tired of the long journey to new home, she just chirped a couple of times, thrust her head inside my jacket and fell asleep. Thus, for several hours she was peacefully sleeping in my lap while I was using the computer and I named her IT-Chick.

I love action movies therefore the three young ones together are called SWAT Team – they always stand out for each other, are quite creative, graceful, fast and co-ordinated. The other two team members are called E.T. for the Extra-Terrestrial and AT – for @ sign.