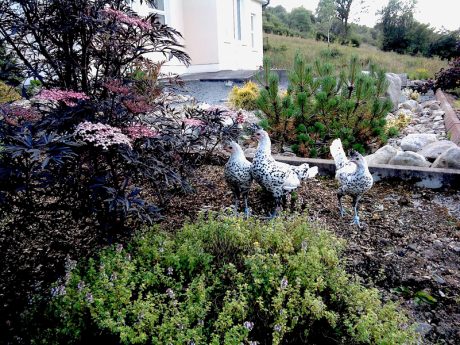 Anyone who has ever had a pet thinks that nothing compares to it. The same here, I love my Silver Spangled Appenzeller Spitzhauben chickens and we get on well. I have spent a long time on getting to know them, letting them learn to know me and we live in mutual respect.

The chickens are well behaved, it is enough to say: ‘Shoo’, when they have gone to a restricted area, to make them leave. They always come to check what you have done in the garden, when you sit down to rest they come to talk to you and are all around you. That is nice! The two sounds that were missing from a perfect country life for me were rooster crowing and bees humming. Tip has filled in the first blank and planting comfrey into vegetable bed has filled in the other. Weeding is so much nicer when the bees buzz in comfrey bush underplanted with highly scented stock your nose can sniff with delight and rooster crowing at the other side of the plot. Added bonus is that lately his crowing has started to sound more like yodeling.

Many photos are taken impromptu when chickens do something funny, like Täp sitting on a two metre high post she freely flew to, evidently she thought it was a good roost but in reality it was a brief moment because she was truly uncomfortable there. The post was half a metre from me and I was holding a member of SWAT Team in my left hand to take inside the house, with the right hand I tried to fish out mobile phone to take the shots.

IT is the smallest of my chickens and when picked up she snuggles inside the helm of my jacket, at some stage she started to climb to my right shoulder or arm and liked staying there. So, one day I sat at the computer with her sitting on my right arm and tried to take a photo with iMac but she decided to climb on top of my head and roost there. This made taking the photo a bit tricky as I had a cap on and could not see the screen from under it, I also could not move the cap as she would have fallen off. Somehow I managed to capture the moment.

One evening ET was following IT’s example and when IT was comfortably on my right shoulder, ET just flew to the left and I walked to the house with them. My friend and former colleague Jane in Estonia calls me Chicken Whisperer.

Tip and Täp are enjoying the comfort of their own mobile coop, the SWAT Team has by now also got their own luxury shed from Swedish pine to protect them from the elements and predators and they love it from the day one. Usually when I picked them up in the evening to take to their box inside the house they were told that now we go inside the house. For their first evening in the coop I told them that now you go to sleep and took each one into the shed where I had placed their familiar box with board across for a roost. The next evening I did not have to pick them up any more, just kept repeating ‘Now is time to go to sleep.’ They listened and started to move towards the shed, I kept the three of them moving together and in they went. The third evening I even did not have to do anything, they moved into the shed all by themselves when the time was right. Excellent!

Next morning after letting the SWAT Team out AT demonstrated her flying skills by taking off at the door of their shed and flying diagonally across the mobile run of Tip and Täp ending in yellow oregano bush covering some 10 metres in the air. It was a graceful and beautiful airshow. This is a flighty breed and I quite understand that impatient people definitely have lots of trouble with them as I have read from different poultry forums and the more happy it makes me feel when they listen to me, come and talk, sit on my shoulders or even head. The long bonding process has paid off with interest!

Living on a hill has its pros and cons. One of the cons is the absence of horizontal level space. In order to have the shed installed I was sweating in 25 degree Celsius heat with a metal bar and a bucket on the slope of the hill. The hill consists mainly of heavy clay and stones in various sizes. During the rainy periods clay turns into a swamp your feet sink into and during dry hot weather clay turns into a solid rock. If I were into ceramics and pottery, I could have made the hill into nice clay pots and outdoor sculptures for the garden or into bricks to save on construction costs. Inch by inch some level space started to form eventually and there was a line from a song haunting me during this whole process: ‘I will do anything for love, but I won’t do that…’