A Taste of Europe 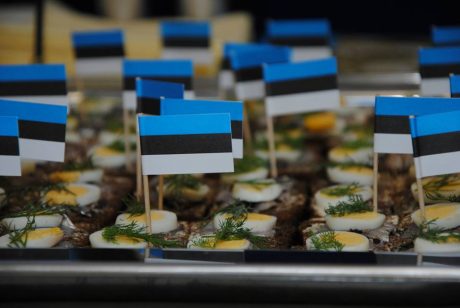 The European Parliament Information Office in Ireland and the European Commission Representation in Ireland in co-operation with several embassies of EU Member States celebrated Europe Day on Friday 9th May with “A Taste of Europe” at EU House Dublin, where different embassies showcased samples of their national food. Estonian Embassy introduced spicy Baltic sprat sandwiches with quail eggs laid by Estonian quails in 12 Quail Farm. All photos in this Gallery are courtesy of Estonian Embassy in Dublin.

This year, to mark the 10th anniversary of the 2004 enlargement, music and dance was provided by artists from most of the EU10 countries (Czech Republic, Estonia, Cyprus, Latvia, Lithuania, Hungary, Malta, Poland, Slovenia and Slovakia).

Europe Day – 9 May every year: Celebrating the creation of the European Union.

Europe Day commemorates 9 May 1950, when the then French Foreign Minister Robert Schuman presented his proposal on the creation of an organized Europe, to help maintain peaceful relations between European countries. His idea was a new form of political cooperation in Europe, which would make war between Europe’s nations unthinkable.

This proposal, known as the ‘Schuman declaration’, is considered to be the act that created what is now the European Union.

9 May is celebrated in various forms in most member states of the European Union and EU candidate countries such as Turkey. EU Delegations will organize in cooperation with Member States’ embassies in their host countries activities on the theme of Europe in the World. Lectures, competitions, film festivals and other events will demonstrate the best the EU has to offer. Every year there is a different theme for Europe Day. In 2014 it was “A Taste of Europe”.

Every year, the poster that best captures the idea of the EU is selected to represent Europe Day. Browse through the posters below to view the past winners.